I got a sudden (sudden in a planned way!) chance to visit my hometown as my boss declared that he, with family, was going on leave. It was not a revelation to me, as he had mentioned this to one of my colleague who, in turn, passed this important piece of information to me (though he was warned not to!). I have not been to my hometown for months, so I felt ecstatic and packed my bags. Thanks to the timely info, my tickets were ready. My mother also happened to be in Delhi around that time and we, my mom and me, were really looking for that kind of golden chance. So, we cashed it.

In home, I found my father reading the autobiography of Dr.Yashodhar Mathpal. He told (better say advised) me that one should always try to meet the living contemporary legends. It has an entirely different effect than the knowledge gained merely by reading books. We, therefore, decided to go to Bheemtal to meet him and visit his museum of art and folk.

The next to next day, by 11am we were in Khutani which is about 2 km from Bheemtal. The weather was very hot and sultry in Haldwani. Up here, suddenly we felt the drop of mercury and really rejoiced. What a heaven! 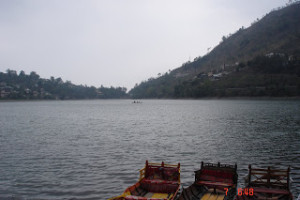 We met Dr Yashodhar Mathpal there. He, with his full grown white beard, looks almost like Rabindra Nath Tagore. I guess he should be around 75 without a wrinkle in the face, a sign of the zeal for life! He is a painter, archaeologist and a writer. He looks after the maintenance of the museum and also the visitors, single handedly. In short, he is a ‘one man army’ for his art and folk museum. There are two floors in the museum. The lower one had weapons of prehistoric and historic periods, rare tickets and coins etc. in display. Large model paintings of Kailash Parvat, the old hand-made clothes representing the cultural heritage of Uttarakhand, very big baskets made of different woods and many other things related to the traditional living were on display there. 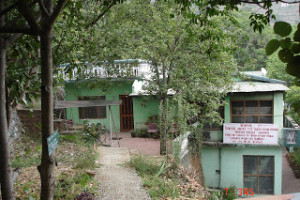 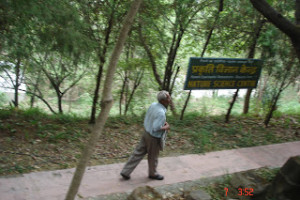 Then he took us to his old museum. It was separate from his new one. A lot of models and paintings were there too. It was my first chance to visit this type of place. I bought 7 greeting cards having the pictures of his paintings. These are meaningfully beautiful. I wondered why we don’t have a lot of people of his kind to see and meet, and that too during our childhood; and why I did not get the chance to meet him earlier.

Interestingly, I got to know that my father has only one passport size photo of his father. In the photo he is pictured with my grandmother. My father told me that when he took the picture some 40 years back, his mother protested and requested to leave hukka behind. She did not want a photo with the hukka in hand. But he did not agree. So, in the photo he is holding the hukka and this it is covering about 1/4th of his face. This was his last and perhaps the only photograph. Soon after the photograph was taken, he died. My father wanted to have a painting of his father with hukka part removed and with face filled by imagination. He showed the photo to Dr Mathpal and requested to make a painting. Dr. Mathpal said it was a bit difficult as the face was not fully visible and it’s very hard to imagine but promised he would try his best. Then we bid adieu (our goodbyes) and moved towards Bheemtal.

On the way back, we noticed the increasing traffic. When you are in a place with cold breeze, you feel the smell of petrol and diesel even more. Roads are too narrow for this kind of traffic. If you are a pedestrian you have to be extremely careful and rely on “stop, wait and watch” strategy as taxi drivers are reckless, young tourist mass is too self obsessed, and extremely educated administrative mass is myopic to think of anything. The fate of our country!

We had our lunch by the side of the lake. It was homemade chane and paranthe. We enjoyed it. If we knew the weather could be so pleasant, we would have come with lots of other edibles. It’s unbelievable to see the difference in weather between 35 km. We had a cup of tea and delicious bhuttas there. We spent some 2-3 hours, enjoyed the divine beauty took so many photos and started our journey back.

One thought on “Bheemtal: A beautiful lake city of Uttarkhand”